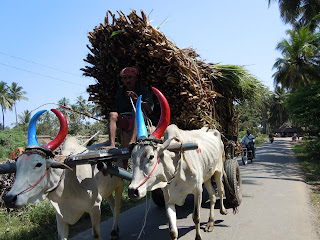 ‘Bullock-carts, bicycles –will maintain Indian village economy’ and motorization demands more power/fuel energy which is very dear to India. Manually operated bicycles and cattle pulled bullock carts are rural friendly transport with less economy and requires less maintenance. The bullock cart is one thing you will find as a major means of transport in the rural areas of India. The ideal symbol of India should be the ever-present bullock-cart. In a school textbook, we had a lesson which showed an aeroplane in the sky above a cart plodding on a village road, and moved on to describe the contrast that this country was. In villages and small towns, bullock-carts were used as a means of transport. Most of our population live villages and their main occupation is farming. The distance from their homes to the fields was about two to three kilometers. Generally, they would either walk to the fields or enjoy their journey in their bullock cart.The bullock cart was also utilized as a means to carry goods like grains, vegetables, crops, hay, cattle feed and other essential commodities. It was the only means of transportation for members of a family residing in the village, to commute directly from their homes to other villages, towns, or places at district levels.The manufacture of the wheels and the body of the bullock cart was the main business of the carpenters in the village.
Over half a century on, the creaky vehicle must have yielded place to a faster, more mechanised means of transport. Bullock carts are one of the earliest and most popular modes of transport in the 19th and early 20th century India. They were used for a variety of purposes, such as travelling and transportation of goods. Fittings done to the bullocks include placing a wooden platform with a sturdy tongue between the parallel wheels of the cart to create space for passengers or freight. The driver holding a yoke hitched to the two bullocks on one hand and a thin whip on the other was invariably an Indian with betel juice running from his lips. Bullock carts significantly contributed to the early economic development of Tamilndu as they were used to move goods. At construction sites, bullock carts were used to transport materials such as bricks. Bullock carts were also used in road repairing. Why hadn't even our IITs, ranking among the best technical institutions in the developing world with all the Western know-how at their back, done something about the indigenous mode of road transport.
Why is it that we succeed in nuclear research but not in bullock-cart technology? Once a means of transport for royalty and now known as ‘poor man’s chariot’, bullock-cart, is an original contribution of ancient Indian wisdom to the rest of the world. The historical object of a cart was once synonymous with the Indian economy. According to some others, bullock-carts survived the onslaught of transport revolution due to the duality of Indian economy. “With an increase in industrial activities in rural areas, the bullock-cart is being used more and more,’’ says Pannir of SEVAI. In Trichy, in Gandhi market several persons use carts for ferrying vegetables and other commodities. The reason given ranges is from cheap cost to easy availability and flexibility. If you approach a typical bullock-cart owner, hunching in his makeshift seat atop the cart for an explanation, the answer would be rather simple. “It gives us (the bullocks and the cart owner’s family) enough to eat twice a day. The mother of all vehicles has also got some touch-ups over the years and her good old wheels gave way to rubberised ones, giving her a smooth roll. Poor people use bullock carts and studies indicated that the income of about 50 percent of the poor rose above the poverty level.EtNS.
Posted by Etram - Newsline at 2:46 PM